DeKalb Park District recently ordered a new ping pong table for their park. The table Item T1086030 was cast in the “Stealth” Gray color with granite aggregate top and SB11 (sandblasted, natural color with granite aggregate) base.  Each end included DeKalb Park District’s name contrast sandblasted and painted.   The table top is polished and sealed with 2 coats of gloss sealer.  A top coat of graffiti sealer is than applied. 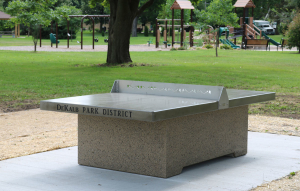 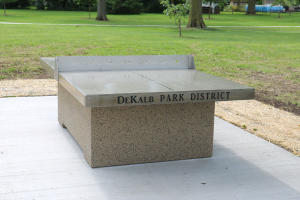 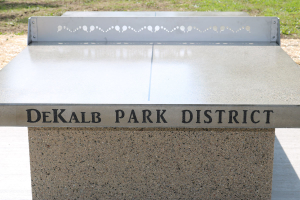 We recently painted the front of our building and replaced the sign with our new Doty & Sons logo.
We have a photograph of Cal and LaVern Doty standing in front of the building. The photograph was taken in 1971. This photograph also appears on the home page of our web site.

On August 13th we recreated the photograph showing the newly painted building and sign.  Another photograph includes Eric Doty who plans on continuing the business a 3rd generation.

We are proud of our business and the fact that we are a manufacturing business.  Cal and LeVern Doty started the business in 1948.  They built a reputation of making quality products and providing good service to their customers.  Sixty-Eight (68) years later we are upholding that reputation. 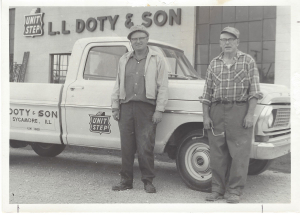 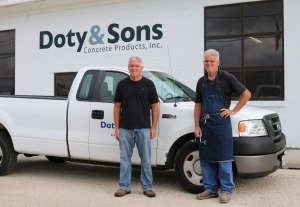 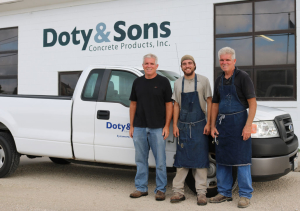 Doty & Sons was honored and excited to work with the Portland Cement Association to commemorate their 100th anniversary.  We manufactured benches for the PCA headquarters in Skokie, IL. PCA selected the large Plaza Style(Item B5200).  This bench is 96″ Long x 18″ Wide x 17″ High.   PCA selected C2 finish, which is a light sandblast limestone color.  The bench seats were polished and we contrasted sandblasted the benches with PCA’s selected inscription and logo.   PCA also selected bench B722418,  which were placed on the campus back to back as shown in the photograph. 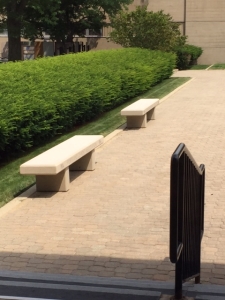 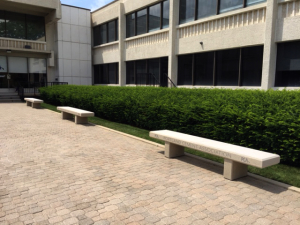 B5200 benches. Shown in C2 finish with contrast sandblast logo and inscription. 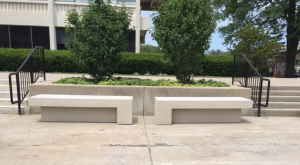 Doty & Sons also manufactured a bench the CTL Group which is on the same campus as Portland Cement Association.  We customized the finish to match the color of the building and included a sandblasted inscription and CTL Group’s logo. 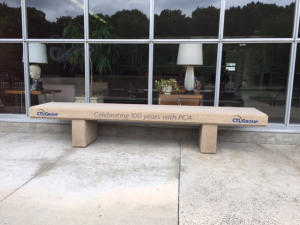 This article appeared in DeKalb Chronicle and The MidWeek newspapers.  Written by Katie Smith.

SYCAMORE – A donation to the city’s park district has sparked friendly competition among parkgoers.

Twin brothers, Sam and Tom Doty of Doty and Sons Concrete, 1275 E. State St., Sycamore, donated a concrete, outdoor table tennis table of their own creation to the Park District. Attached to the table is a memorial plaque, commemorating their father, former Sycamore businessman Calvin Doty, who died in 2014.

“It’s just part of remembering him as a business owner in Sycamore for all those years,” Sam Doty said. “We thought it would be nice to donate something to the park with his name on it.”

Calvin Doty and his father, Lavern, started Doty & Son Concrete products in 1948. Throughout his life, Calvin Doty delivered mail for the Post Office, worked construction, and served as a medic in the United States Army. A memorial scholarship fund wascreated in his name last year.

The table is one of Doty and Sons’ newest creations, and is currently being manufactured alongside the company’s benches, tables, and planting pots, which also furnish the Park District’s grounds.

The game has been placed near the Good Tymes Shelter in the Sycamore Park District sports complex, where it is surrounded by a sand volleyball court, horseshoe pit, pond walking trail, and playground.

“The table not only adds a new, unique way to enjoy the park, it’s a work of art in itself with the District logo and memorial plaque on beautifully crafted concrete,” Superintendent of Parks and Facilities Jeff Donahoe said in a news release.

Throughout the Summer Concert Series, the Park District will offer outdoor table tennis paddles and balls, available for checkout during the shows.

“It’s a good place for people to use it, and I know they were using it one of the first nights,” Sam Doty said. 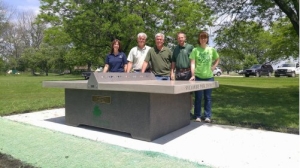 Doty & Sons fabricated the forms and cast 18 benches for a customer in the Bahamas.  This bench has now been added to our product line, the Item number is B5975. 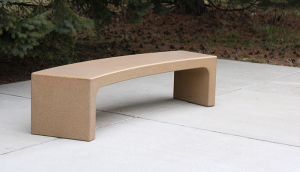 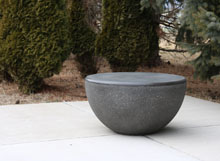 Shown below is a remembrance garden project in Pawling, New York that we supplied several items for. On this project, we supplied some personalized memorial benches with engraved bronze plaques, as well as memorial plaque bases with bronze donor plates. 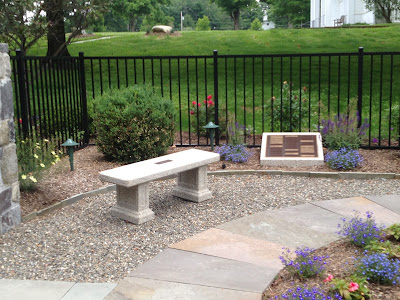 Donor plaques are nice because you can add nameplates year by year to help pay for site improvements.  These plaques can be placed on pretty much any of the products that we manufacture. Visit our memorial website for different products and photos.  You can also check out are main website at www.dotyconcrete.com or give us a call toll free at 800-233-3907.
Have a great Independence Day!!! 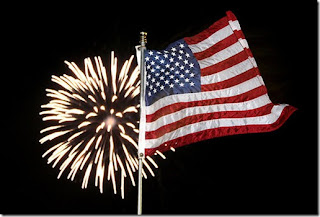